There is much confusion about active and passive so I thought I should give the correct explanations to help you sort it out.

Many companies describe powered speakers as active. This may be true in their sense but not in the true hifi sense.

The description active-passive really refers to the loudspeaker crossover network. This is the part inside the speaker box that splits the signal into bass, treble, midrange etc to go to the different drive units.

The passive crossover has no power of it’s own, it takes it’s power to work from the music signal. It is made of capacitors and inductors to separate the frequencies. In a simple two way system a capacitor might feed all the frequencies above 1kHZ through to the treble unit while an inductor will throw out everything above this away and feed the rest to the bass unit.

These components are large and somewhat crude to have the necessary power handling, up to around 30 volts. There are many types of passive crossovers, 1st, 2nd, 4th order, with various technical issues for and against, but in almost every case they sap your amplifier power and are fairly inaccurate. 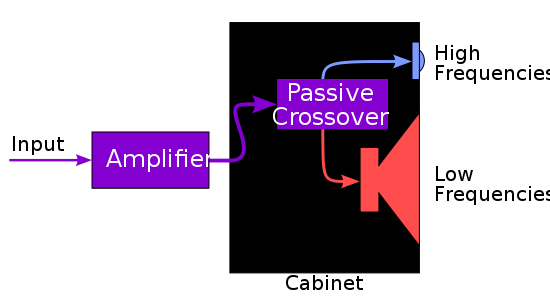 The active crossover layout places the crossover before the power amplifier in the layout. The crossover is then dealing with voltages less than 1 volt and you can have a very accurate frequency split, in some cases tailored exactly to the characteristics of the loudspeaker drive unit.

The power amplifiers are then coupled directly to each drive unit without losing any power and giving increased dynamics. 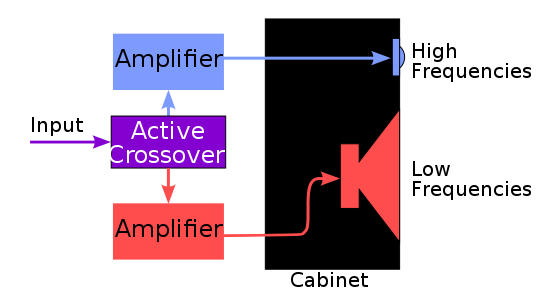 The layout then becomes:

The benefits of this layout are obvious, so what are the drawbacks?

Cost is the obvious first one. Given that other considerations such as better amplifiers, source s, etc could improve your system more, this tends to be an end step and therefore at the more expensive end with higher level power amplifiers. One really good power amplifier will sound better than two poorer ones!

Second is the expertise at the manufacturer. To do active properly a company has to be controlling both loudspeakers and amplifiers at a high performance level. There are very few manufacturers that are successful in both markets.

Currently I think that only Linn and Naim promote active technology in the domestic hifi market, although it is common in pa/concert rigs. It will be interesting to watch developments as to whether the Focal/Naim merger leads to more or less active systems?

This very specialised expertise means that in practice few people will ever own an active system, even thought the rewards are great.

It’s just a shame that the pockets have to be as deep!

I have been encouraged by the response to my first two articles, ranging from strong support and interest to didn’t understand past the second line!

This email address is being protected from spambots. You need JavaScript enabled to view it.